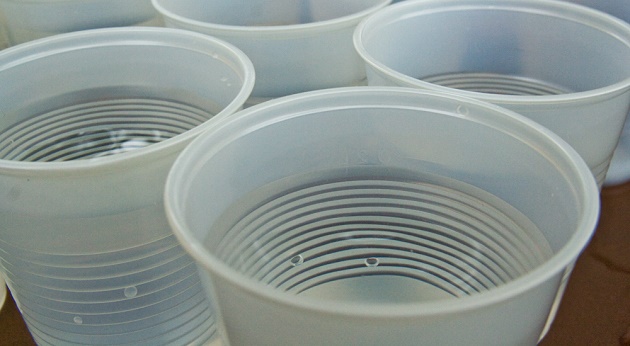 Plastic cups are often used for various events so if you’re fond of hosting parties, you might find yourself in an abundance of used and unused plastic cups. Since the plastic of these containers are quite sturdy, they are great for making a handful of new items or for repurposing into something more practical and useful. If there’s an abundance of unused plastic cups in your home, consider using them for other purposes around the house. If you ended up with bags of plastic cups after a party, don’t throw them out just yet. Instead, clean them out, then repurpose or use them for DIY projects. Here are six plastic cup crafts that will help you get started.

Clear, plastic cups can provide seeds with a similar environment as greenhouses do with plants to promote the seed growth into seedling. Fill the bottom of one cup with seedling starter mix then plant the seed. Squirt some water on the area above where the seed should be then tape another plastic cup upside down on top. Once the seedling has sprouted and has begun forming leaves, transfer it to a seedling pot.

Plastic cup flower bouquet is a really simple project you can do to add a pop of colour and an unusual decoration around the house. Cut strips all around a coloured plastic cup about three-fourths of the way down. Fold down the strips flat until they spread out of the cup like petals. Add your preferred design at the bottom of the cup to represent the center of the flower then attach a wooden stick at the bottom to serve as stems. Keep them upright by sticking them onto a block of Styrofoam.

If you have a particularly large amount of plastic cups waiting to be used, turn them into a simple lampshade. All you really need to do is secure the plastic cups beside each other using hot glue or stapler until you form a large circular lampshade. Manipulate the way the cups are secured beside each other so you achieve your desired lampshade size. Then, you can either hang the lampshade on a pendant light or insert some string lights into the cups.