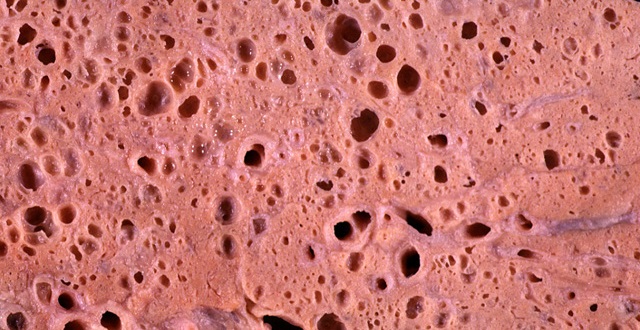 First things first: honeycomb lung is not actually a disease. Rather, it is the change in the structure of the lungs that is commonly seen in people afflicted with certain respiratory-related diseases, in particular during the end stages. Since it’s not a disease, naturally, honeycomb lung is not infectious in any way.

This pathological finding gets its name from the fact that the lung tissues end up resembling a honeycomb upon visual inspection. What makes such happen is the presence of small cyst-like structures that can be observed even without the aid of a microscope. The said structures have diameters large enough to be seen by the naked eye, although they usually do not grow beyond 10 millimeters in diameter. The presence of honeycomb lungs can be observed when the person suffering from a respiratory-related disease undergoes x-ray or computed tomography (CT) scan.

Specialists in lung care and diseases say that the presence of honeycomb lung is an indicative of poor prognosis. In other words, it is unlikely for the patient to recover from the disease that has caused the honeycomb-like appearance of the lung tissues. The goal is to prevent the disease from worsening and causing further complications.

Pulmonary hypertension is another complication that may arise from honeycomb lung. This is a kind of hypertension (high blood pressure) that has a profound effect on the arteries found in the lungs, as well as the right side of the heart. Fatigue, dizziness, fainting spells, shortness of breath, chest pain and cyanosis (bluish discoloration of the skin and lips) are some of the symptoms of pulmonary hypertension.

The initial and most noticeable symptoms of honeycomb lung are shortness of breath and dyspnea (difficulty in breathing). This does not really come as a surprise since the small cyst-like structures that characterize honeycomb lung significantly reduce lung capacity. These initial symptoms are noticeably progressive too, meaning they worsen overtime.

Nonproductive cough may be experienced by the individual with honeycomb lung. This particular symptom is similar to having dry cough wherein there is no sputum or mucus produced or expelled when coughing. As the respiratory-related disease behind honeycomb lung progresses, lung infection may take place which results in various additional symptoms.

Diseases That Cause Honeycomb Lung

Idiopathic pulmonary fibrosis is a disease characterized by thickening and stiffening of the tissues found deep within the lungs. Medical experts do not really know what causes this disease to transpire, and that is why the word “idiopathic” is present in the name of the disease.

Another disease that can lead to honeycomb lung is what’s known as sarcoidosis. This results in the formation of inflammatory cysts in various parts of the body, including the lungs. The presence of small growths in the lung tissue alters the structure of the lungs as well as affects the proper functioning of the said organs.

There are numerous other diseases that can lead to the development of honeycomb lungs. Some of them include radiation pneumonia, rheumatoid pneumonia, asbesotosis, aspiration and connective tissue disorders that may affect the lungs.

Sufficient rest is important as honeycomb lung tends to cause fatigue due to the decreased lung capacity. However, mild exercises prescribed by a doctor can help in maintaining or even improving current lung performance.